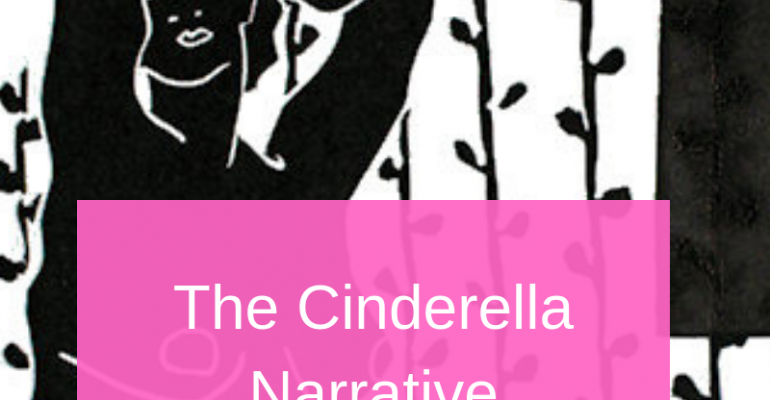 Narratives are important in any culture, in particular stories we hear as children because they tell us what we should expect of life and how far we can dream. They also warn us of potential dangers and how to escape them. This is why representing a diversity (gender, race, age…) of leading characters in movies is so important and this is also why we should pay attention to the stories we tell our children, especially our girls.

I started a new series of lino prints where I am re-telling a story, or more exactly re-drawing a part of that story. The first narrative I chose is Cinderella, it is a very ubiquitous narrative and it has been retold many times in modern versions (Maid in Manhattan, Pretty Woman…)

So what is wrong with the Cinderella story ?

One thing many fairy tales have in common is that the female protagonist is mostly passive. Sure she often has a hard time, might be victim of abuse like Cinderella, or might be even in danger of being killed (Snow white, Blue Beard) or being forced to marry her father (Donkey skin), but she never confronts that threat directly. She stays and endure the situation or she runs away but the salvation always involves a prince who will marry her.

This bring me to another point: Why would all women we identify with in the fairy tales need to be in a couple? Most of the princes are nondescript and could be easily switched from one story to another. The only single women in the tales are old witches, or women too ugly and mean to find a suitor (Cinderella sisters). It seems like any heroin would not be complete or be happy without a prince, it reinforces the idea that a woman is not enough by herself.

Also have you noticed that the princess is always the tiniest : the tiniest feet, small fingers, very young. Disney princesses for example have impossibly tiny waistlines. The princess is never a medium or a large size woman, she is always a woman-child. It is almost as if she has to be the least physically threatening for the prince.

The original version of Cinderella by the brothers Grimm is closer to an horror movie than a story for kids. The sisters are actually cutting parts of their feet to try to fit in the slipper, one cuts her big toe and the other one her heel, and there is an alarming amount of blood everywhere. I can’t help to see a parallel with the pressure put on women to conform to some stereotypes of beauty and the recourse to plastic surgery, cutting bits off or adding some in all the right places

And then there is the glass slipper …

This is the definition of a slipper:
“a comfortable slip-on shoe that is worn indoors. “

How a glass high heel came to be called a slipper is a mystery to me. First high heels are anything but comfortable and then a glass high heel is the summum of impracticable or even physically possible (it would break under the weight of a person) .The glass part of the glass slipper comes from a translation error from the French where “vair” has been translated as if it was “verre “(glass). Vair is actually the skin of an animal from the family of squirrels. I am not sure what is better though between glass high heels that would break under your weight and squirrel skin slippers to go out to a fancy ball.

So I decided to make my Cinderella a luscious woman, she is not a tiny woman-child, her squirrel or glass slipper have been replaced by flip flops because she like to feel comfortable and the prince is not in the picture but she feels enough as she is.

Can there be such a thing as a feminist nude?

Small infinite spaces and the half empty/half full glass