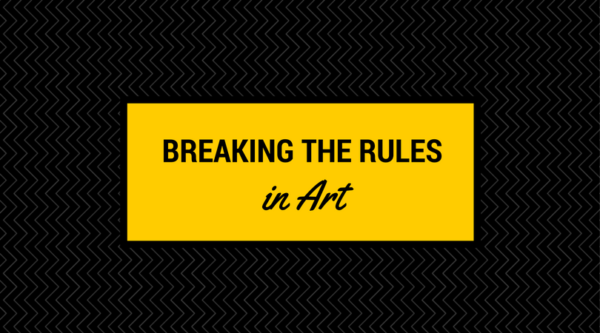 In the history of Art, many Artists did choose at one point to deliberately break the rules of their time, rules about composition, perspective, narration, etc…

While breaking those rules they did create some breakthrough works of Art and opened new possibilities for the Artists that followed. Many times these works were not well received by the public who wasn’t  yet used to such different ways, but eventually the public taste got accustomed to new ideas. What seemed chocking 150 years ago is consider as classic nowadays.

Breaking the rules of composition:

In these two examples by French painter Edgar Degas (1834-1917), we can clearly see the influence photography had on the composition of his paintings. His influence was not the type of planned or posed photography with a deliberately balanced composition but more snapshot type photography.

Before the invention of photography, you will hardly find a figure cropped at the edge of a painting but this kind of composition, breaking the old rules, added a sense of spontaneity and freshness to the paintings.

Breaking the rules of perspective

One famous Artists that did break many rules is certainly Picasso, in particular rules of perspective, but also rules of proportions and depth. This is clearly visible in his painting “Les demoiselles d’Avignon” from 1907. Nowadays, our modern eyes are not surprised anymore by this kind of pictures but at the time it was made, this painting was very controversial, and very unlike anything painted yet. It wasn’t received very well and Picasso did hide it for nine years before showing it in an exhibition.

The figures in that painting start to show some elements of cubism, the proportions are not exact, two of the faces seems inspired by African masks and there is no sense of depth in the picture.

Picasso also sometimes used what is called dual perspective, that means showing an object viewed from different perspectives simultaneously. In the painting Woman in Hat and Fur Collar (1937), one eye is a profile view and the other one is a front view, the nose is also seen both from the side and front.

This dual perspective can be later seen on the works of Francis Bacon who often cited Picasso as a great influence on his art. You can see an example of a dual perspective on the face and the hands in this Study for a self portrait.

Matisse also comes to mind when thinking about breaking the rules of perspective. If you look at the “Harmony in Red” painting, there is no real sense of depth as all the elements seems to be located on the same plane. This effect is accentuated by the use of bold colors, patterns and dark outlines.

Breaking the rules of proportions and narration

Édouard Manet (1832–1883) was classically trained. When he painted his famous “dejeuner sur l’herbe” in 1863, it caused a big scandal. Even though the painting has a classic look, there are many oddities in that painting :  We are not sure why the woman is naked, sitting next to the two clothed men on the painting. She stares right at the viewer, seemingly ignoring everything that is going on around her. The woman in the background is totally out of proportion and we also wonder what she is doing in that scene.

There are many examples in Art of Artists breaking the rules and thus participating in the evolution of Art. Marcel Duchamp and his game-changing ready mades is a recent example that gave a new direction to contemporary Art.

Breaking the rules doesn’t have to be so dramatic, it can be just a decision to ignore a rule of composition or just take risks with your style:

Did you deliberately break some rules in your Art?

How to add zentangle patterns to your paintings: In Kyoto