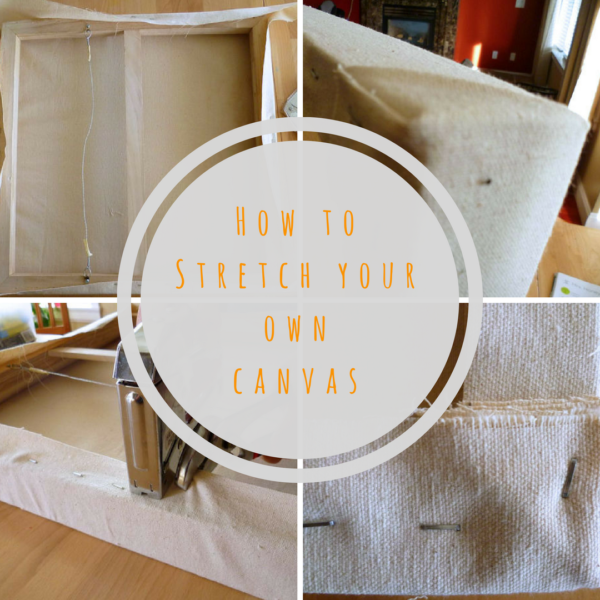 I had some old paintings in my house that I still like  and am not yet ready to burn yet but as my skills have hopefully been improving since I started painting, I was thinking it would be a good idea to store them as a rolled canvas and reuse the frame for a new painting. It is not the best way to store a painting but a good compromise for those paintings you don’t like so much anymore.

Note: I am not talking about the picture shown up here 🙂

I did a bit of research on the internet and gave a try a stretching a new canvas with a piece of fabric I had at home. It is actually not very difficult to stretch canvas on a frame and I am posting here pictures of my process and what I learned while doing it.

Then I did lay out the fabric on my table and did place the frame on top.

I did trace the contour with a pencil, leaving enough fabric to go around the frame.

On my first try, I did make the fabric shorter than the with of the frame, even though it is like this on most frames you are buying, I think it looks better if the fabric covers the stretcher completely.

So, on my second try I made the fabric a bit longer so it covers the stretcher bar completely.

The most important thing to know id to start in the center and work outside and opposites ways. I used a stapler gun and a pair of pliers

Once you did put 2-3 staples in the center of a side, stretch the canvas and staple the opposite side, then do the same on the other sides.

Pulling with the pliers and stapling. The second time I asked my husband to help me, it is way easier to do it when you have one person pulling and one person stapling.

Work you way from the center to the corners, then fold the corners and staple them.

The first time I did fold it like this but it is quite visible.

So the second time I did fold it like this.

So the second time I did fold it like this.

The next step is applying gesso on your canvas if you want to.