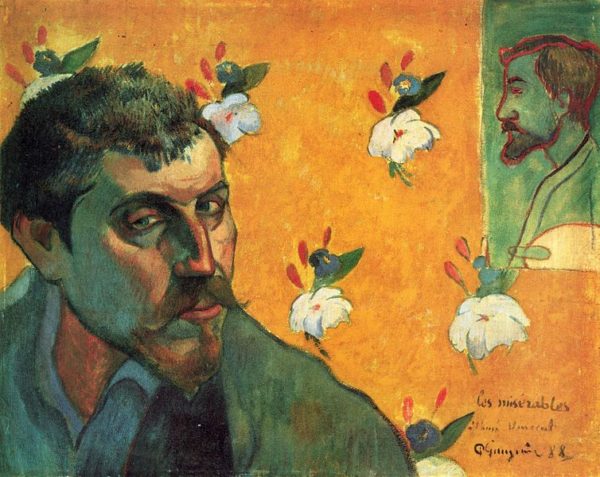 I recently went to the Seattle Art museum to see the Paul Gauguin exhibition, it was a great experience to see for real paintings I had so admired in books.

Before going to the exhibition we did a bit of research on Gauguin’s life and his art as it makes the experience of going to the exhibition only more interesting.
The problem with Paul Gauguin is the more I know about his life the less I like him as a person. And well… there is a lot not to like about the infamous Paul Gauguin… The fact that he left his wife and 5 children to pursue his art career following what we would call today a huge mid-life crisis. Apparently he was very self satisfactory and a bully to his entourage. Then there is the inclination to marry or take as companion very young girls ( 14 or 15 years old) once he was in Polynesia, after contracting syphilis in brothels. Pain made him heavily self medicating with morphine and alcohol at the end of his life.

I also dislike the way he would ignore the complexity of Polynesian culture and reduce it all to a fantasy with a paradise populated by “bon sauvages” living a simple and easy life, such a colonialist view of a foreign culture… Polynesian culture is very complex and there are lots of codes and traditions, the opposite of a care free life on the beach.

There is even a theory out there that will make him directly responsible for cutting Van Gogh ‘s hear!

Then there is the art, the art that speaks for itself. I always was drawn to his paintings, the lush colors, the beautiful woman, the accentuation of edges that makes surfaces appear flat. He is not obsessed with reality, the exact quality of the light as most impressionist were, there is some fantasy and imagination in his work, sometimes he would even make up symbols like a secret language. His way of applying color with small touches is what still links him strongly to the Impressionists, but his approach is way bolder, there is something wild in there.

So all this to me begs the question: “Does the personality of the artist matter when we are looking at his work”, is what he did or not in his life relevant to the way we should appreciate his art? In a way can a bad person make good art or a good person make bad art? The answer seems to be yes, but does it matter?
We had a few striking examples in France, I am thinking about the critically acclaimed writer “Louis Ferdinand Celine” but also known for his antisemitism. I am also thinking about Bertrant Cantat, found guilty of beating his girlfriend actress Marie Trintignant to death, he went to jail and did his time but there is an uneasy controversy in France, should he still be allowed to play his music and be featured in the media? Or should he by respect to the victim family be as discreet as possible and stop doing what is his work, sharing his music with the public. He was supposed to perform in a play in Quebec recently at the Theatre du Nouveau Monde for The three Sophocles plays, directed by Wajdi Mouaw, but after much controversy the Canadian government decided to deny him entry to the country.

Do you think we should consider the artist personality and his work as a whole or is it irrelevant?

On the same subject: